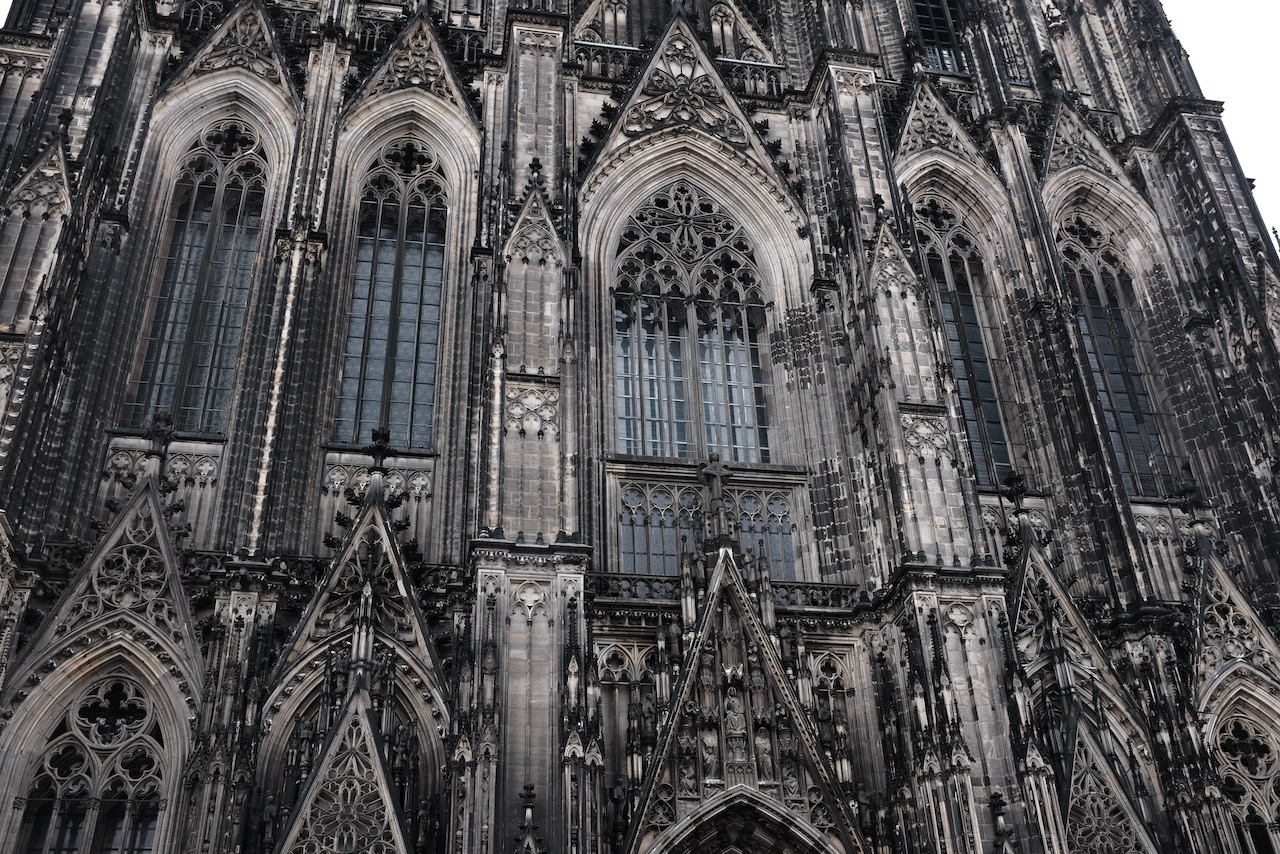 Cologne is a city dominated. Upon arriving into Köln HBF, the enormity of the Döm hits you. Towering over everything, watching over the city that was so devastated during the war, casting a shadow only just darker than the blackened structure itself. The fact that this monument to the heavens—–600 years in the making—–escaped destruction is a minor miracle.

After arriving and storing our bags in the station, we explored the cathedral’s interior, which was as towering inside as out. I found the stained glass particularly captivating; dense, intricate patterns of contrasting colours, directing and tinting the light so that it danced across the smooth stone floor. Impossible to photograph, but beautiful to observe. Walking deeper into the cathedral revealed an ornate shrine claiming to hold the remains of the three wise kings from the nativity. 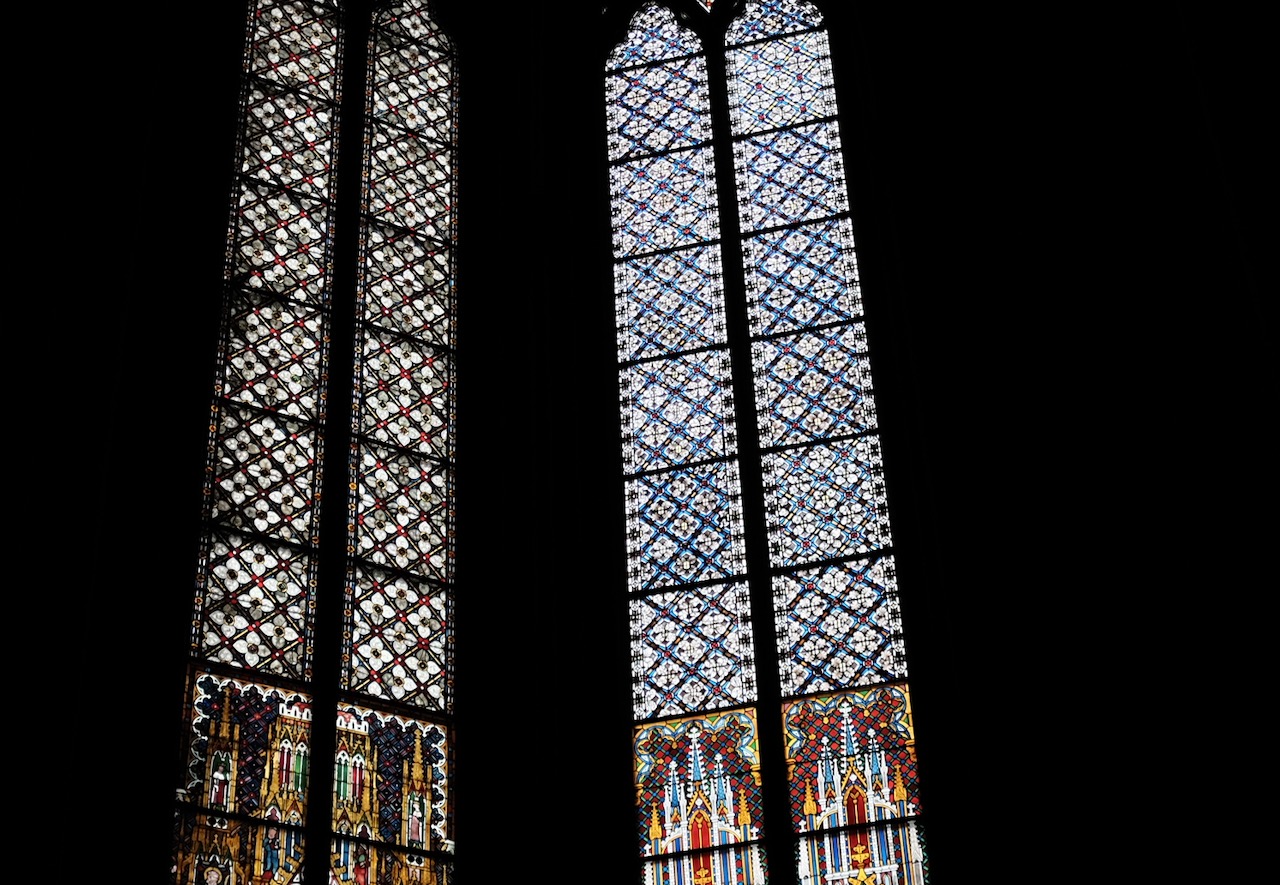 We decided to climb the 500+ stairs to the top of the south spire. An endless spiral staircase was the only access, and the constant turning left me pretty dizzy at the top. The difficulty of the climb proved to be a grace however, since the viewing platform was near-deserted. We witnessed two Americans turning around half-way up, and I’m sure there were many others who did the same.

The summit gave us an unrestricted view of all of Cologne. With no other buildings even close in height, it reinforced the absolute dominance of the Cathedral over the rest of the city. We completed a circle of the platform and took in the area. 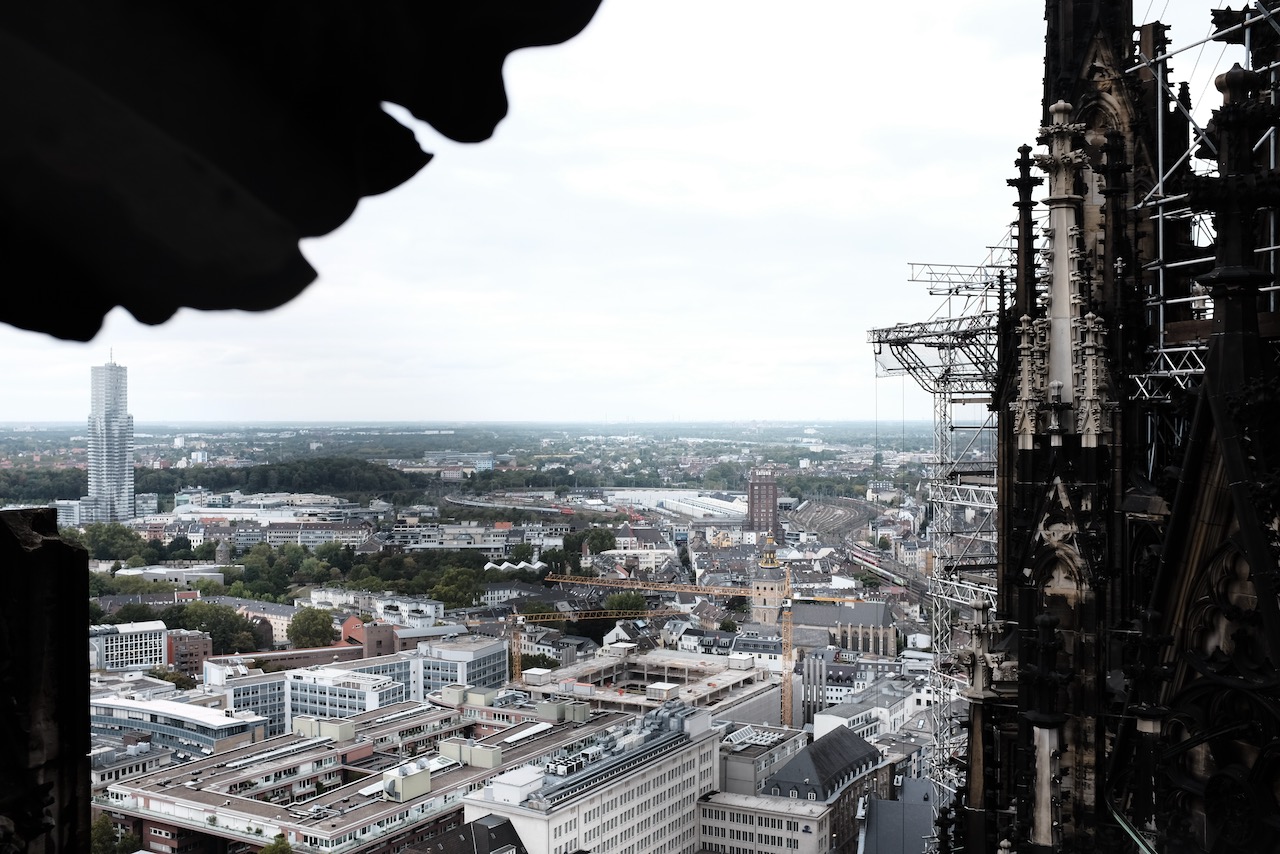 After descending the cathedral, we checked-in to our AirBnB. For Cologne the guide recommended little aside from the cathedral and a scattering of museums, so we opted instead to have our first taste of German beer halls, of which two were singled out.

Stopping first at Brewery Paffgen, we had a very late lunch of black pudding, liver sausage (effectively pate) , and some rye bread. Described as “bar snacks”, the resulting portions were very generous, and we were sufficiently satisfied. We also worked through 6 skinny 200ml glasses of kölsch, a method of serving beer unique to Cologne. The beer hall was cavernous, and the staff were curt. A seemingly authentic experience.

Our second stop was Brauerei zur Malzmuhle, on the other side of the city centre. Navigating through the tight wooden revolving door a busy scene of tiny glasses of beer and humungous plates of pork knuckle opened up before us. We were lucky to grab the remaining free table, before two glasses of kölsch were thrusted in front of us by default. Such is the devotion to this tradition that this was the only beer served by the glass. Although we’d only just finished our “lunch”, we opted for dinner here, both choosing the signature “heaven and earth”, a dish of fried black pudding, onions, and mash. If we weren’t full before, we definitely were now.

6 skinny beers later, we were done for the evening. Walking back to our AirBnB alongside the grassy tram tracks we remarked on how our attitude to Cologne was changing; initially only seeing it as a city housing an impressive cathedral, the fast-paced tradition of the endless kölsch service reminded us that there was a unique culture to this place.

Cologne felt like real Germany, with a tourist draw at the centre. Whilst the rest of the city wasn’t particularly beautiful or historic, it was a taste of the rebuilt post-war Germany and the ordinary people who lived amongst it.