Jack Morris
Disjoint Sets (& Why I Have a Favourite Data Structure)
May 3, 2020
Algorithms Swift

Say you have a collection of elements, and you want to group them into a number of sets (that are each disjoint). One example could be grouping nodes within a graph that are connected by a path of edges. 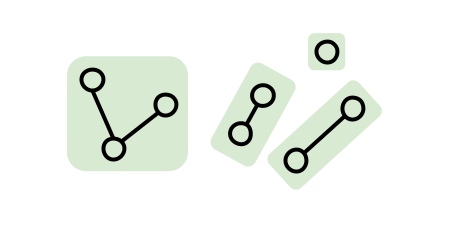 There are a number of different data structures you could use to do this, but one which I find particularly elegant is a disjoint set.

Each set will be represented internally as its own tree. With this representation, the three operations are pretty simple to implement. 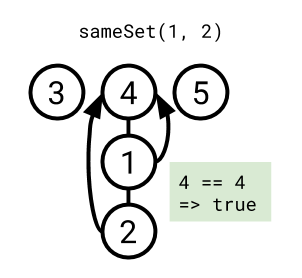 The above is all we need to get something working, but there are two heuristics that we can use to improve performance. 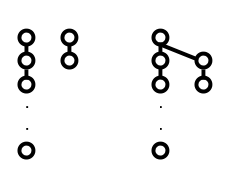 The right tree is much shorter than the left, so root it under the left tree on union.

After performing an operation such as sameSet(4, other), all nodes on the path from 4 to the root are moved directly under the root. This makes the paths shorter next time around.

With those two heuristics in place, it can be shown (using a proof that I admittedly don’t understand) that any sequence of m insert, union and sameSet operations can be performed in O(mα(n)) time (where n is the number of inserted elements). α(n) is the inverse of the Ackermann function, which grows so slowly that α(<number of atoms in the universe>) < 5, so this term is effectively a constant.

How cool is that? I love how such a simple data structure with a few optimizations results in a time complexity based on a function so weird as the Ackermann function.

An example implementation in Swift is below (or in a Gist, if you prefer). I’ve tried to thoroughly document the implementation but feel free to reach out if something doesn’t make sense.